Losing our cost competitiveness?
When manufacturing giants like China, and neigboring Asian countries rapidly grew their manufacturing sector in the 90s and 2000s, it was a foregone conclusion that it was cheaper to manufacturing products in those country than in the Philippines. The main culprits, power, labor, transportation cost were often cited as being uncompetitive for manufacturing. There’s no denying that our electricity prices are among the highest Asia, and our minimum wage higher than most Southeast Asia countries. This is partly why many people assume that manufacturing has moved off-shore. But the reality, as we have seen, is that the manufacturing sector’s output continued to grow, and in fact has accelerated in the last four years. Why?

Power
We have previously pointed out in previous posts, that power cost as component of total manufacturing cost varies significantly, depending on the product that you produce. Some products may require a lot of power to produce, reaching 50% of total cost, while some products can consume power at less than 1% of total manufacturing cost. In fact, the average share of electric power to total manufacturing cost is only 4.7%. That’s a surprisingly low number. Second, power cost of manufacturers can be lower that the cost that you see in your electric housebill, Not only are industrial rates lower, many manufacturers produce their own power. So cost of power, while it’s an important component of manufacturing cost, is certainly not the main driver of competitiveness for many industrials sectors. Since the Philippines had high power cost for a long time, it’s not surprising to see that sectors that consume less power have thrived much better.

Wages
High wages are another often cited reason for our lack of competitiveness. Minimum wage in the Philippines is higher than many Southeast Asian countries, sometimes even higher than countries with higher per capita income like Thailand. However, wages are very dynamic. In recent years, wages in Thailand, Malaysia, Vietnam has rapidly increased, while Philippine wages has been rising at a relatively slower rate. The average annual wage increase in the country is only 4.1%, compared to double digit growth in Vietnam and other neighboring countries. Second, one needs to compare total cost of labor, minimum wage and average wages does not fully describe the full cost of labor.

Is the Philippines competitive?

Competitiveness is very complex. Comparing a few cost components cannot give us a clear picture of our competitiveness. And given the near infinite variety of products being manufactured, there can’t be absolute competitiveness when comparing countries. It is however possible to approximate one’s competitiveness if it’s measure with a common reference. Which is why I found the following graph very interesting. In the JETRO survey of 2013, Japanese companies were asked how their cost of producing in foreign countries compared to the cost of producing in Japan. The results was very surprising to me. The Philippines is the 3rd lowest cost country in among 16 countries in the survey. 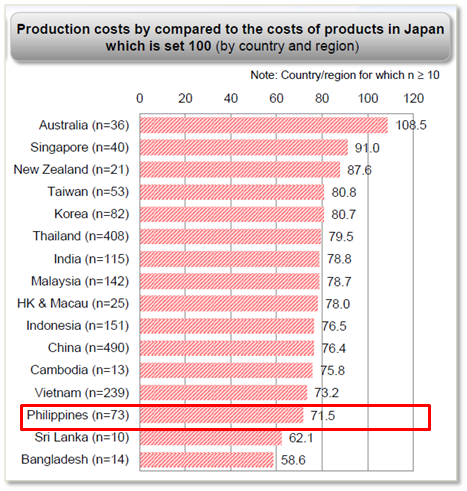 Does this mean that based on the Jetro survey, Philippines is now among the low cost countries in Asia? One needs to be careful in interpreting this table. We need to remember that Japanese companies produce different sets of products in each country, hence it can’t be an apple to apple comparison. Nevertheless, the cost difference between producing in Japan and the Philippines is more favourable than most of the other countries in the survey. Certainly a valuable insight for foreign investors looking for lower cost locations in Asia Pacific.

How do we sustain our gains in industry? Given the unprecedented collaboration between government and private sector that led to the creation of doznes of road maps, how do we sustain it? The best way is to institutionalize it. This is well demonstrated by the Philippines Board of Investment, when they launched a website that raises awareness on Philippine industries, providing comprehensive industry data, industry news, policies and programs. What I find most exciting about it is that it is now the repository of the industry and sectoral roadmaps developed by various industry associations and government in the last four years. It contains 28 sectoral roadmaps, the manufacturing, agribusiness and services roadmaps and ongoing programs. Kudos to DTI Secretary Gregory Domingo, Usec Adrian Cristobal, the BOI Governors, Asec Aldaba, Director Corieh Dichosa and many more forward thinking leaders in the DTI.